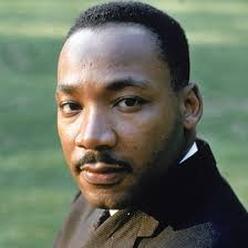 Martin Luther was born in Atlanta, Georgia on January 15, 1929. His original birth name was Michael King Jr, given to him by his parents, Michael King Sr. and Alberta Williams King. Martin's father, Michael King Sr, took the name Martin Luther King Sr. in honor of of the religious leader Martin Luther..soon after his son would adopt the name as well. Once Martin Luther turned 15, he attended Morehouse College in Atlanta, and was quite a popular student there. Fast forwarding to the spring of 1963, he started organizing a demonstration in Alabama. Although he was jailed, by the end of the campaign, Martin and his supporters were looking for a peaceful change. On August 28th, Martin made his famous "I Have A Dream" speech at the Lincoln Memorial. In this influential speech, King talked about how black and white children would join hands, and the sons of former slave owners would eventually be able to live together. This speech relates to the Civil Rights Movement because it got Congress to start working faster to pass the Civil Rights Acts. It was overall a drive to get equality for all Americans, not just whites, and to end the violence. King was the most important Civil Rights leader because he used powerful speeches to make the nation come together as one.
"I Have A Dream" Speech